40+ Tumblr Statistics, Facts, and Demographics for 2022 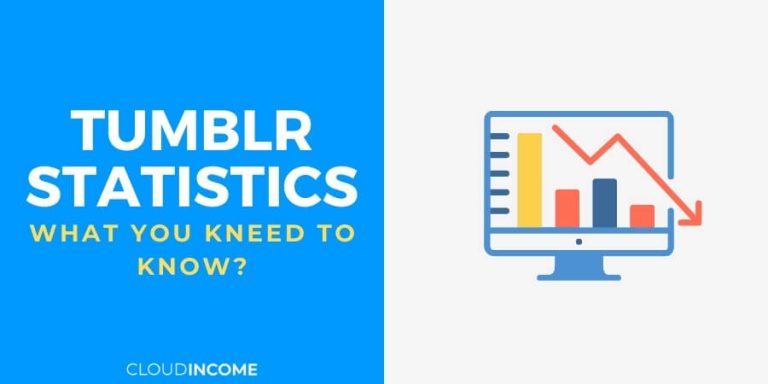 Lately, Tumblr statistics have ignited quite a lot of controversy and debate over the future of the social networking platform.

Some argue that Tumblr is gradually dying, while others believe that it’s still the king of microblogging. So, which is it?

Well, as a man of math, I say that numbers don’t lie. And so, to find out the real truth about the current status of the platform, I’ve compiled more than 40 Tumblr statistics from a wide range of reputable sources.

This article features all the relevant facts you might want to know about Tumblr’s blogs, posts, users, traffic, usage trends, market share, and revenue in 2022. You can think of it as the ultimate compilation of the latest Tumblr statistics and demographics.

Before we dive into the details, though, let’s get all the facts right. What exactly is Tumblr? And what does it do in the first place?

Tumblr, for starters, is a social networking platform that specializes in microblogging. Since it was founded in 2007, it has offered millions of users simple multimedia tools for posting and sharing short-form blogs.

And to be more specific, Tumblr operates almost like a blend of Twitter, Facebook, and WordPress. You get to create and share text, videos, images, audio, plus links with your followers. Then once you post something, Tumblr automatically publishes it in your followers’ feeds.

This basic model has seen Tumblr grow tremendously over the years, to a point of attracting even A-list celebrities.

Sadly, however, Tumblr has also experienced its fair share of downturns and controversies. Read along to find out all about the major ones, plus their subsequent consequences and fallout.

2. That marks a growth of almost half a billion since May 2011, when Tumblr only had 17.5 million blogs.

4. Then between July and October 2014, Tumblr managed to surpass 200 million, after the number of blogs increased from 195.1 million to 207.3 million. In fact, during this time, Tumblr even overtook Instagram as the fastest growing social platform.

5. In 2015, however, Tumblr’s blog volume expanded at a slightly slower rate. So much so that by January 2016, Tumblr had only accumulated a total of 9 million blogs.

6. It was only until July 2016 that the platform finally crossed the margin again and into the 300 million range. The precise bog count at this time was 9 million.

8. The new controversial policy changes ultimately caught up with Tumblr in January 2019, and its growth rate slumped quite drastically. Web traffic to the site dropped 41% over a two-year period.

9. According to Tumblr, users are now publishing about 8.9 million posts every day.

10. Internet Live Stats, on the other hand, has computed the numbers and established that Tumblr is publishing about 2,060 posts per second. That places it ahead of Instagram, which uploads 1,146 photos per second, but way behind Twitter, which sees 9,921 tweets per second.

11. Cumulatively, Tumblr has now published more than 200 billion posts since it was launched. In just ten years, the numbers have grown from 5 billion (in May 2011) to 5 billion by April 2019.

13. At its peak, Tumblr was hosting more than half a billion visitors per month. In December 2018, for instance, the platform attracted about 521 million unique visitors.

But, the fallout didn’t stop there. Although Tumblr seemingly showed signs of recovery in July 2019 with 380 million monthly visitors, it eventually plummeted into the 200 million range. By June 2021, the platform could only manage 319 million worldwide visitors per month.

15. But, the fallout didn’t stop there. Although Tumblr seemingly showed signs of recovery in July 2019 with 380 million monthly visitors, it eventually plummeted into the 200 million range. By September 2020, the platform could only manage 292 million visitors per month.

17. The year 2021, on the other hand, began with 337.8 million unique monthly visitors in January. But then, it subsequently dropped to 303.3 million the next month, then steadying itself mid-year, June July at 319.2.

18. That means Tumblr has lost almost half of its traffic in just two years. All because of a simple policy change.

19. While Tumblr is used worldwide, the vast majority of its users are based in the U.S. Domestic visitors alone account for 42% of its overall traffic.

20. And if you considered just the desktop traffic, the U.S. happens to take up 47.65% of the traffic. That’s according to June 2021 Tumblr statistics.

21. The United Kingdom comes a distant second, bringing in only 5.84% of the monthly Tumblr traffic.

22. The third biggest source of Tumblr’s traffic is Canada, which accounts for 5.29% of the monthly traffic.

23. Australia and Germany rank third and fourth, with 3% and 2.93% monthly traffic volume respectively.

24. Tumblr is particularly popular among Millennials. They account for 69% of the users.

25. Tumblr is most popular among Millennials in the USA. The percentage of U.S. internet users who use Tumblr as of the end of 2020 is highest among 26-35-year-olds.

26. Tumblr still maintains a mostly positive user experience, as of 2021 the platform scored a 69 point score with its user base.

27. However as of the end of 2021, the platform did not even register among teenagers as a popular social media platform.

28. Twitter is the largest social media traffic referrers to Tumblr, accounting for 31.5 percent of referrals as of June 2021

31. In terms of gender, it turns out Tumblr is equally used by men and women. Only 7% of both men and women in the U.S. are currently leveraging the platform.

32. When it comes to income, however, it just so happens that Tumblr is particularly popular among six-figure earners. 2018 figures showed that 27% of households earning more than $100k in the US were using the platform, while 25% of earners in the $80k-$100k income bracket had a reach of 25%, followed by 24% among households earning $70k-$80k.

33. S. users are particularly fond of accessing Tumblr through their smartphone app. So much so that they’re spending, on average, 115.81 minutes on the Tumblr app each month.

34. In total, there are now more than 74 million monthly Tumblr app users in the U.S. alone.

35. It’s worth noting, though, that only 31% of the users in the U.S. admit to using Tumblr on a daily basis. 68% of them are doing it on a weekly basis, while 88% access Tumblr on a monthly basis.

37. Right when Tumblr was experiencing phenomenal growth in 2013, Yahoo acquired it for a whopping $1.1 billion. It was later taken over by Verizon in 2017 after the company acquired Yahoo.

38. At the height of the public backlash in 2019, Tumblr was again sold to Automattic– but for an astonishingly low figure of just $3 million.

I guess it’s evident that once upon a time, Tumblr did actually rule the social media airwaves. It was a billion-dollar platform that was hosting hundreds of millions of users per month. So, of course, the prospects were solid and the future looked bright for the platform.

You see, Tumblr’s problems began way before that, thanks to Yahoo’s poor management policies. The executives at Yahoo just couldn’t figure out how to make everything work. Then, in the end, the major policy shift in 2018 proved to be the final nail in Tumblr’s coffin.

Now, don’t get me wrong. I’m not saying that Tumblr is dead. Yahoo tried to derail it alright, but then the platform saw a glimmer of hope through the superhero known as Automattic.

Well, if you haven’t figured it out by now, Automattic is the same company that owns WordPress. Given the company’s track record this proved promising to help revitalize the platform but, alas, some things can’t be fixed once broken.

In spite of the pandemic pushing more people indoors and spending more time online than ever before, the platform was able to grow in size by merely existing but continued to shrink in both social media market share and its ability to bring back a younger audience. If Automattic was unable to resurrect the platform, it is hard to say if anyone will be able to.

Tumblr seems to only exist as a cautionary tale of how policy changes can drastically hurt your fanbase. There may still be a future for the platform but as it stands, it looks pretty grim for the once titan of online blogging.