Enter your email below to get my insider-only tips.

I'll respect your privacy and you can unsubscribe any time. No spam, ever. 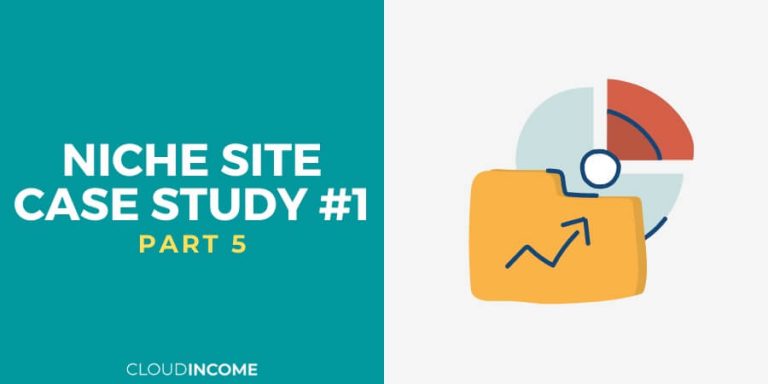 This is the fourth monthly update for the Niche Site Case Study, where I will show you how I take a niche and attempt to rank a website that earns a passive income. With the ultimate goal of flipping this site for a 16-20x multiple.

What Happened In October?

One of the keywords I am tracking seems to be jumping around a bit (the last one in the image above) – all others seem fairly stable with the main keyword moving between 7th & 9th spot frequently.

Overall then things look pretty stable. If I want to hit the top 5 for the main 22k search term then I have my work cut out. Some big sites are in this niche, most ecommerce!

One neat thing you can do with Clicky is to overlay data from previous periods to highlight where your site has made improvements. In the charts below, you can see how traffic for October (dark line) performed against September (lighter line).

It’s nice to see that the changes I am making are having a positive impact on the bounce rate and average time per visit.

Let’s see how that affected the earnings, shall we?

With those earnings in the month in October, things are looking good. November has continued to earn well each day, however at a slightly slower pace than last month. I’m looking to black Friday to help boost sales and commissions.

I mentioned last month that there was a Panda update imminent and with the PBN scare people building niche sites didn’t know how things would pan out. So far I would say the site took a little dip with the Google update in terms of traffic but overall it held up pretty well.

Can This Become An Authority Site?

I was asked the question by one reader if I thought I could turn this site into an authority site. My answer to that would be “erm…maybe, maybe not”

You see first off the domain I have used lends itself to just this one product, its a keyword domain with a prefix. If I wanted to branch out and extend its scope then I would struggle to talk about the other products in the niche as the domain name is very limiting.

I have thought about picking up an aged domain, or just a better domain and letting it mature for 6 months and then transferring the site over to that – but that’s a risky game and I may end up losing the current rankings.

The other reason I am unsure is that I have used both The Hoth packages and my PBN to get this site where it is today. Granted I’ve not done a ton of link building, however, this just isn’t the way to build an authority site these days.

You need natural and higher quality links from relevant sources to sustain longer-term.

I’d like to hear from you if you have a niche site and how these last couple of months have been?